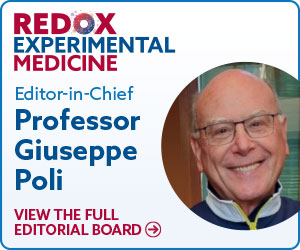 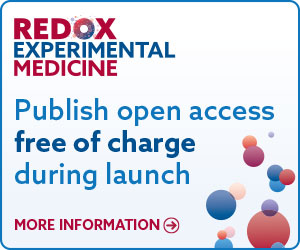 Circulating oxysterols in Alzheimer’s disease: a systematic review and meta-analysis

Redox Experimental Medicine will link redox research to human health and disease, focusing on the much underserved medical area related to redox.
The journal’s first issue is available free to read now.

In celebration of the launch of Redox Experimental Medicine, Bioscientifica is sponsoring the Article Publication Charge until the end of 2023.

Led by Editor-in-Chief Professor Giuseppe Poli, Redox Experimental Medicine is a peer-reviewed, open-access journal publishing redox research that advances our understanding of the effect of redox processes on human health and disease.

Brain is an oxyregulator organ, however extremely vulnerable to oxygen. Both high and low oxygen concentrations generate free radicals and may cause oxidative stress and damage because of an insufficient response of the antioxidant system. Hypoxic preconditioning (HP) exerts neuroprotective effects and may be a protecting tool against oxygen fluctuations, thus preventing neuronal damage in events such as ischaemia, acute hypoxia, stroke, or traumatic brain injury, among others. This review aims to discuss the molecular mechanisms involved in the neuroprotective action of HP against oxidative stress and subsequently upon the brain under pro-oxidant conditions. Activation of the antioxidant defences represents the first line to neutralize oxidative stress and is characterized by low reactive oxygen species, reduced oxidative damage biomarkers, and increased level of reduced glutathione. These protective mechanisms decrease cell death activating anti-apoptotic signalling pathways and reducing neuroinflammation by the inactivation of microglia and astroglia cells. HP could be considered a new approach to reduce oxidative stress derived damage caused by a great variety of brain pathologies. Despite our intriguing findings, further experiments are needed for a better understanding of the molecular mechanisms involved in the neuroprotective actions of HP.

Oxidative stress in nonalcoholic fatty liver disease: a reappraisal of the role in supporting inflammatory mechanisms

In the last decade, non-alcoholic fatty liver disease (NAFLD) and particularly its evolution to nonalcoholic steatohepatitis (NASH) have become a leading cause of chronic liver disease and cirrhosis as well as an important risk factor for hepatocellular carcinoma. Oxidative stress is a common feature of NAFLD/NASH and plays a key role in the complex of metabolic and cellular derangements that are involved in the development of liver steatosis, as well as in the transition to steatohepatitis. This review deals with the contribution of oxidative stress in promoting hepatic inflammation which represents a key factor in NAFLD evolution to liver fibrosis/cirrhosis. We discuss in detail recent data involving oxidative stress products as triggers for hepatic innate immunity and as a source of antigens implicated in sustaining lymphocyte-mediated adaptive immune responses. Attention is also paid to emerging evidence linking oxidative stress and extra-hepatic complications of NAFLD/NASH. 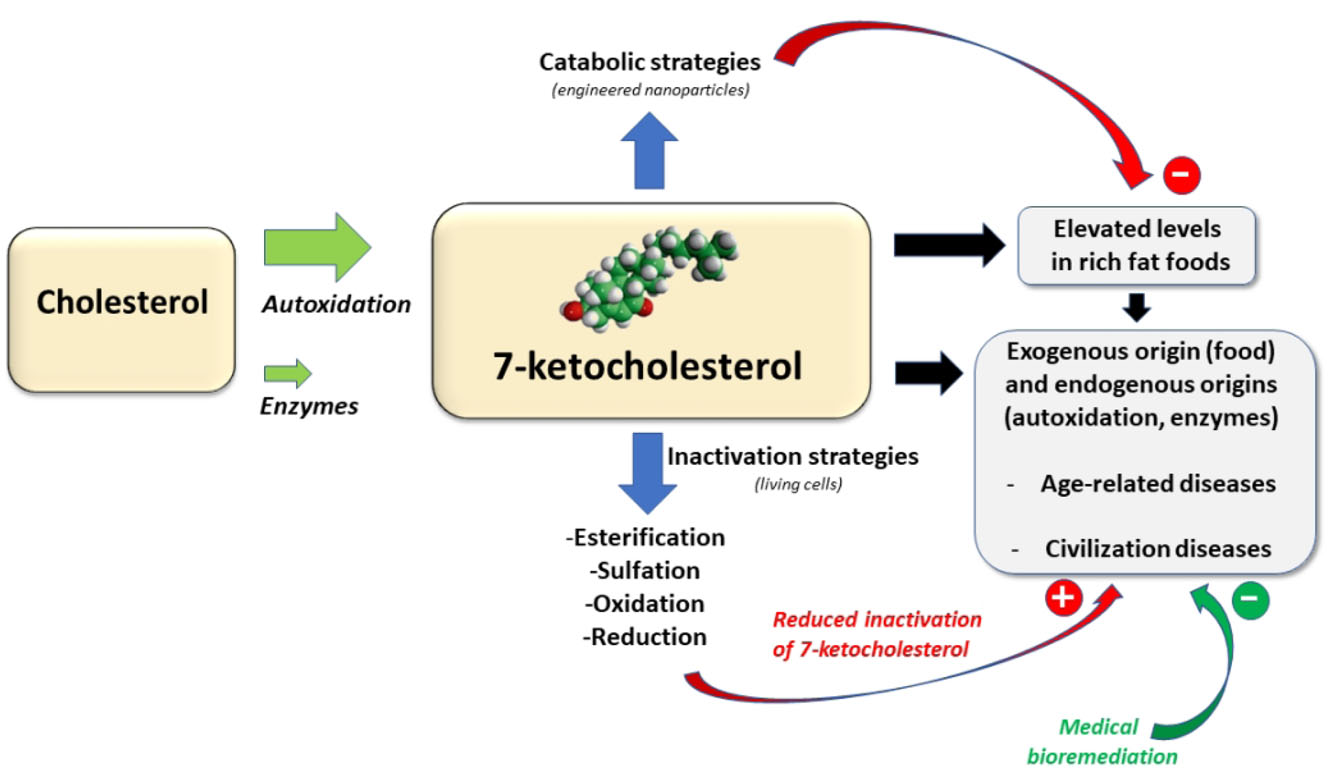 7-Ketocholesterol (or 7-oxocholesterol) is an oxysterol essentially formed by cholesterol autoxidation. It is often found at enhanced levels in the body fluids and/or target tissues of patients with age-related diseases (cardiovascular, neuronal, and ocular diseases) as well as in subjects concerned with civilization diseases (type 2 diabetes, bowel diseases, and metabolic syndrome). The involvement of increased 7-ketocholesterol levels in the pathophysiology of these diseases is widely suspected. Indeed, 7-ketocholesterol at elevated concentrations is a powerful inducer of oxidative stress, inflammation, and cellular degeneration which are common features of all these diseases. It is important to better know the origin of 7-ketocholesterol (diet, incidence of environmental factors, and endogenous formation (autoxidation and enzymatic synthesis)) and its inactivation mechanisms which include esterification, sulfation, oxidation, and reduction. This knowledge will make it possible to act at different levels to regulate 7-ketocholesterol level and counteract its toxicity in order to limit the incidence of diseases associated with this oxysterol. These different points as well as food and biomedical applications are addressed in this review.

Circulating oxysterols in Alzheimer’s disease: a systematic review and meta-analysis

Despite decades of research, the cause and series of events underlying the advancement of Alzheimer’s disease (AD) have not yet been established. Lipid, especially cholesterol, levels have been proposed to be implicated in AD. Several studies have been undertaken and many are ongoing in different directions looking at the importance of circulating cholesterols and oxidised cholesterols in AD with inconsistent methods and results. This meta-analysis aims to systematically analyse available data describing the involvement of oxidised cholesterols in mild cognitive impairment (MCI) and AD. We conducted a systematic literature search of six databases MEDLINE (PubMed), BIOSIS (Web of Science), EMBASE (Elsevier), PsycNET, Scopus and Cochrane library for studies measuring oxysterols (24-hydroxycholesterol (24OHC); 26-hydroxycholesterol (26OHC) and 7-oxycholesterols) in serum or plasma from MCI/AD patients compared to age- and gender-matched cognitively normal controls. Data were analysed using the inverse variance and standard mean difference with random-effect analysis model at 95% CI for association between oxysterols and MCI/AD in Review Manager (RevMan) software version 5.4.1. Between January 2000 and April 2022, 175 studies were identified by two independent researchers out of which 14 met the inclusion criteria and were analysed with a total of 957 controls, 469 MCI cases and 509 AD cases. The standard mean differences between MCI/AD participants and controls did not show any difference in the oxysterol levels except for 26OHC level which was higher in AD but not statistically significant.